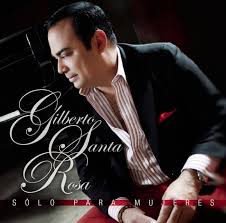 Santa Rosa (birth name: Gilberto Santa Rosa Cortés [note 1]) was born in Santurce, Puerto Rico. Here he received his primary and secondary education and became interested in music. He took part in his first concert while a teenager and in 1976, he made his recording debut as a backup singer with the Mario Ortiz Orchestra; soon afterwards he was recruited by La Grande Orchestra, where he became the lead singer. He remained with the orchestra for two years, during which time he met Elias Lopez who helped to mold and polish him as a singer.[1]

During the 1980s, he recorded "Homenaje a Eddie Palmieri" (Tribute to the Messiah (Eddie Palmieri)) with the Puerto Rican All Stars. He also recorded with various orchestras, amongst them the Tommy Olivencia Orchestra, and the Willie Rosario orchestra. Santa Rosa developed a unique style of "soneo" (improvisation) in salsa that permitted him to be successful in both the "tropical" and "romantic" styles of the music.

In 1986, Santa Rosa formed his own band and signed with Combo Records; a string of hits followed, such as "Good Vibrations", "De amor y salsa" (Of Love and Salsa), "Punto de vista" (Point of View), "Vivir sin ella" (Living without Her) and "Perspectiva".

Santa Rosa was also the first singer of tropical salsa to carry out a concert at the Carnegie Hall Theater, in New York City, where he performed as the opening number, his unique version of the salsa tune, "Represento" (I Represent), composed by Lou Briel. This event was recorded live at the hall, and later released as an album.[3] A highlight of the night was the four-minute unscripted addition he made to his song "Perdoname" (Forgive Me), which solidified his improvisational talent. This live version became such a sensation thereafter that Santa Rosa had to memorize his own improvised lines for future concerts, and Perdoname became the closing song to his shows.

In 1990, Santa Rosa joined the all star "La Puertorriqueña" project which included Andy Montañez; in the same year he was awarded the Billboard Lo Nuestro Award for Best Male Singer. He also participated in the play "La pareja dispareja" (The Odd Couple) alongside Luis Vigoreaux and Rafo Muñiz. In 1995, Santa Rosa traveled to Japan as Puerto Rico's Good Will Ambassador, where he sang "De cara al viento" (Facing the Wind) in Japanese. In 1996, the greatest hits album "Caballero de la Salsa, Vol 2" was released and he also participated in the First "Festival Presidente" in the Dominican Republic (a Latin music festival sponsored by local Presidente beer). In 1997, he sang with Andy Montañez in New York Citys Lincoln Center and later that year, with Olga Tañón at the Universal Studios Amphitheater in Hollywood, California.[2]

Santa Rosa's hits continued with the album "Expresión" which included the single "Fulana" (What's her name) and in 2001 with the album "Romántico". He released "Viceversa" in 2002 which became a "hit" in the Latin community in the United States and in all of Latin-America.

Santa Rosa has taken on himself the task of keeping Tito Rodríguez's musical legacy alive and has acquired much of Tito's memorabilia, including articles of clothing, music and furniture from his home in Puerto Rico. Santa Rosa has staged several concerts and dances honoring the late singer, and recorded an album of his where with the use of modern technology, he sings "En la soledad" (In Solitude), composed by Puchi Balseiro in a duet with him. During the week of February 24, 2003 Santa Rosa organized a two-night concert at the Center of the Performing Arts in Caguas, Puerto Rico. As an introduction to the event, he arranged for his private collection of Tito Rodríguez memorabilia to be exhibited in the lobby of the center. In 2004, he released "Auténtico".

In addition, he has long played an important role in the career of his friend and protégé, Víctor Manuelle, who Santa Rosa discovered. The two released a joint live album late in 2005, "Dos soneros, una historia." In 2006, he released, "Directo al corazón", and in 2007 he carried out a concert acknowledged by the critics, in Plaza Colón at Santo Domingo and released Contraste with Conteo regresivo being a major album hit. Furthermore, he performs alongside Chucho Avellanet, a musical comedy club-act called, Cantando y Contando, (Singing & Telling Stories), throughout the island.

On February 9, 2008 Santa Rosa participated in an event named "Concierto del amor" which was organized in the Madison Square Garden. In June 2008, "Contraste" received Gold and Platinum certification from the Recording Industry Association of America.[7]According to the organization, the production has sold over 1,500,000 copies. At the moment of certification, the album's first single "Conteo regresivo" had been sixteen weeks in the first place among Billboard's tropical list.[7] Meanwhile, "No te vayas" began gaining positions in the same list. After participating in New York City's Puerto Rican Day Parade, Santa Rosa prepared to begin an international tour beginning on June 13, 2008, in New Orleans before proceeding to Tampa, Florida, Ecuador, Chile, Spain, Colombia and Mexico.

The concert in Chile, on June 28, 2008, was Santa Rosa's first ever in said country. the event took place in the Caupolicán Theatre and was attended by approximately 8,000 fans. On July 5, 2008, Santa Rosa became the first salsa singer to perform at the Palau de la Música in Barcelona. The event was a Sold Out, filling the venue with an attendance of 2,000. Santa Rosa was selected to perform at the "Balón de Oro" award ceremony, the most important honor in Mexican football. Santa Rosa was selected to take part in "La Nueva Salsa", where he would perform along several young salsa artists. Santa Rosa has also contributed to improving Puerto Rico's public education system. He participated in Sapientis Week, an initiative sponsored by the non-profit Sapientis which brings distinguished public figures into classrooms in order to raise the public's awareness of the education crisis in Puerto Rico. On July 17, 2010, he participated in the opening ceremony of the 2010 Central American and Caribbean Games.

In 2017, Santa Rosa had the opportunity to contribute to Lin-Manuel Miranda's single "Almost Like Praying". The song featured various Latin artists and all proceeds benefit the Hispanic Federation's Hurricane Relief Fund, helping those affected by the hurricane that hit Puerto Rico.