Cool Change started out in their home town of Massapequa, NY singing Doowop acapella during the late 1980's. The members were Lou Etergineoso, Anthony Etergineoso, Joe Calvacca, Alan Lange and Joe Laham. In 1993 they were cast in the Robert DeNiro film "A Bronx Tale", singing the title song "Streets of the Bronx". Had several radio appearances including "Mickey B's Jukebox Review", Don K. Reed's "Doo Wop Shop" and WPLJ's "The Big Show" with Scott and Todd. Performed in nightspots and venues all across the Tri-State area and along the east coast. In the late 1990's they produced their first CD "Cool Change Acapella". After taking a break for a few years, they are back with a renewed enthusiasm and passion. This year they welcome Bobby Furbush to the group who was one of the original members of Still in Style. He brings a new and exciting sound to Cool Change and is a perfect fit all around. Their repertoire has grown to include the sounds of yesterday to the sounds of today. Cool creative vocal arrangements to match their cool attitude and style. 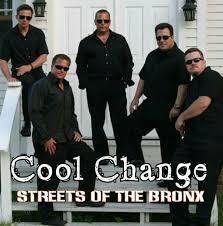