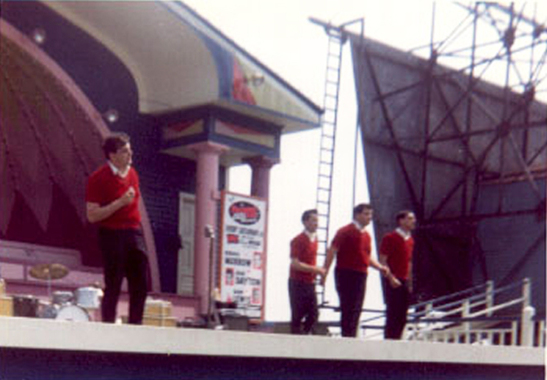 The original Bon-Aires (Scottie McLearie, Mike Paladino, Dennis Diamond and George Lavatelli) formed in late 1962, early 1963. Originally named “Difference”, they were from the northern Jersey area. George and Scottie had previously sung with The Shades from Englewood, Mike with The Princetones from West New York. Dennis was recruited to round out the group. In 1963, song writer Bob Hilliard had the group record a 10 song demo at Associated Studios in NY. After shopping the demo, and establishing a few contacts (Neil Levinson and Steve Duboff), they were fortunate to sign a contract with Laurie Records. A suggestion from the label saw “Difference” changed to “The Bon-Aires” on their first release on Laurie’s subsidiary, Rust Records. The Bon-Aires recorded 7 songs for Laurie, releasing 4 of them. “Blue Beat” and “Driving Alone” were only made available at the test pressing stage. “Angel of Love” remained in the Laurie vaults until 1999. The Bon-Aires went dormant after Scottie moved to Detroit in 1966.
George continued trying to maintain a “Bon-Aires” group, replacing Scottie and adding singers Kenny Fleming and Richie Burns, both from the West New York area. In 1969, George met Stan Krause, who discussed recording the group for his Catamount label. The resulting single, released in 1971, “My Heart’s Desire” coupled with the Skip Jackson penned “New Me”, became a favorite with the vocal group scene. Also in 1971, Dennis moved to Toms River. He tried to continue with the group, but the commute and his job became too much.
At that time, Dennis Ostrom was introduced at one of their rehearsals through mutual friend, James (Sal) Passantino of Blue Sky Records. Dennis had been in a few acappella groups in the 60’s, namely The Citadels, The Virbraharps, and The Vibranique Five. He had just had his first “Blue Sky Boys” single released, when he was approached by The Bon-Aires through Sal to replace Dennis Diamond. Soon he departed his current group, Curious Mellow, and joined The Bon-Aires.
From 1972 through 1977, The Bon-Aires appeared at U.G.H.A, The Academy of Music, Eddie’s Lounge in Teaneck, Sam Marco’s Gangplank in East Newark, Central Theater in Passaic, and others long forgotten. There were also appearances on WCBS’s Norm N. Nite radio show, and Bobby Jay’s show on WWRL. During this period, George formed his independent Flamingo label, and together with Frank Aita and his musicians, recorded 8 songs, 6 of which were released. “Blue Velvet” and “It Can’t Be Wrong” were never officially released.

In 1979, Mike Paladino had officially left the group. Clinton “Jaki” Davis assumed his bass role. Jaki had sung with The Connotations, The Notations, and The Platinums. The Bon-Aires continued appearing at U.G.H.A, but there were no further recordings. In 1980, Jaki departed the group and later joined “Wind Song.” The Bon-Aires forged on as a quartet, appearing at the Beacon Theater in 1981. Shortly thereafter, Tommy Vitale joined the group. Tommy had been in The First Ward Dukes, then The Patterns and then The Infernos. The group continued appearing and resulted in one more recording by the group. Ronnie I released “Broken Heart” from his live 1982 concert on a U.G.H.A. single. That same year The Bon-Aires were given the U.G.H.A Veteran Group of 1982 award.

After performances in 1983, long-time members Kenny & Richie retired from the group. Again, the group went dormant. Then, three years later, in 1986, the final line-up of the Bon-Aires emerged. Enriching the playing field, Ray Block and Phil Granito joined The Bon-Aires. It’s been described as the pinnacle of their reign. Ray had sung with the classy “Vintage” on Catamount. Phil had sung with the “new” Heartaches, and previously toured with The Teenagers for two years. This “Bon-Aires” group was only together for a limited time. They made a 10th U.G.H.A. Anniversary return to the stage and the performances were of the best. Unfortunately, a few forces were at play. After a final appearance at Symphony Space in 1987, the Bon-Aires cut-out at the top of their game!
Phil was being seriously approached by The Duprees. Ray was anxious to start the group recording again. George was getting disenchanted with the whole thing. One evening in 1987, four singing buddies received letters in the mail dissolving the Bon-Aires.
Personnel Update:
Scottie MacCleary – Phoenix, Arizona
Mike Paladino – Kerrville, Texas. Formed the MOONLITES
Dennis Diamond – Passed away in 2012
George Lavatelli – Founder, recently passed away in 2018
Kenny Fleming – Palisades Park, NJ – Still managing his Top Notch Haircutting but getting ready to retire
Richie Burns – Whereabouts in South Jersey unknown
Dennis Ostrom – Hackensack, NJ – Retired
Jaki Davis – Whereabouts unknown – Rumored to be possibly living in Texas
Tommy Vitale – Still in New Jersey
Ray Block – Went on to “East River Drive.” Currently in “The Vic Donna Group”
Phil Granito – Still performing in The Duprees and has his own CDs as The Sons of Saint Rocco
Bon-Aires Discography
Demo Acetate: Begin The Beguine/Tenderly/Teardrops/Twelfth of Never/No More/Over The Rainbow/I’m In The Mood For Love/That Lucky Old Sun/Autumn Leave/???? (Defective track)
Rust 3077 My Love, My Love/Bye Bye 1964
Rust 5097 Shrine of St. Cecilia/Jeannie Baby 1964
Rust TR 3 Blue Beat/Driving Alone 1965
Rust Unreleased Angel of Love 1965
Catamount 130 My Heart’s Desire/New Me 1971
Flamingo 1000 Cherry/At Night 1976
Flamingo 1001 Out Of Sight, Out Of Mind/I Love You 1976
Flamingo 1002 What Did She Use/The Angels Sang 1977
Flamingo Unreleased Blue Velvet/It Can’t Be Wrong 1977
U.G.H.A. 0000 Broken Heart 1982