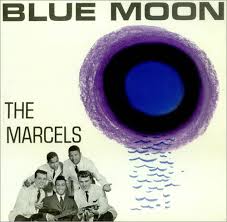 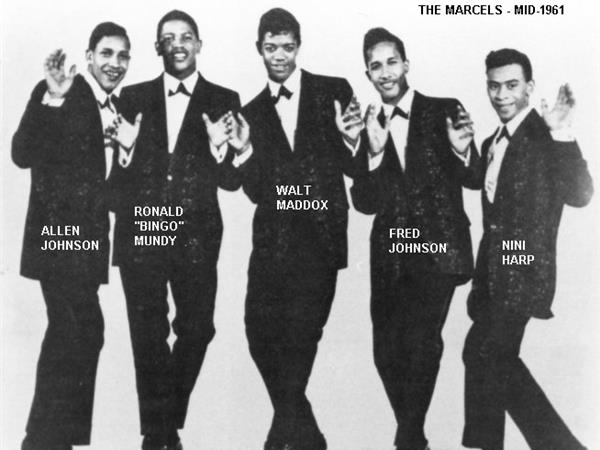 In 1961, the Marcels released a new version of the ballad "Blue Moon" that began with the bass singer singing, "bomp-baba-bomp-ba-bomp-ba-bomp-bomp… vedanga-dang-dang-vadinga-dong-ding…". The record sold over one million copies and was awarded a gold disc.[3] It is featured in the Rock and Roll Hall of Fame's 500 Songs that Shaped Rock and Roll. 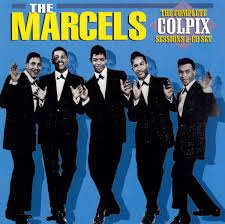 The disc went to number one in the U.S. Billboard Hot 100[ and UK Singles Chart.[5] In the US, additional revivals in the same vein as "Blue Moon"—"Heartaches" and "My Melancholy Baby"—were less successful, although "Heartaches" peaked at #7 on the Billboard Hot 100 and eventually sold over one million copies worldwide.

The introduction to "Blue Moon" was an excerpt of an original song that the group had in its act, a cover of "Zoom" by the Cadillacs. Colpix A&R director Stu Phillips transferred the introduction to "Blue Moon" in order to give the song additional flair. The Marcels recorded "Blue Moon" in two takes. A promotion man asked for and got a copy of the finished tape, which found its way to DJ Murray the K. He promoted it as an "exclusive" and reportedly played it 26 times on one show.

In August 1961, due to racial problems encountered while touring in the Deep South because of the group being multi-racial, Knauss and Bricker—the group's white members—left and were replaced by Allen Johnson (brother of Fred) and Walt Maddox. Mundy left soon after, leaving the group a quartet. In 1962, Harp and Allen Johnson left and were replaced by Richard Harris and William Herndon. There was a brief reunion of the original members in 1973. The group made several recordings in 1975 with Harp back on lead. Original member Gene Bricker died on December 10, 1983. Allen Johnson died of cancer on September 28, 1995 at age 55. By the early 1990s, the group included Johnson, Maddox, Harris, Jules Hopson, and Richard Merritt. The group split around 1995. Fred Johnson formed his own group with new members, while the other four members recruited new bassist Ted Smith. Maddox won a lawsuit against Sunny James Svetnic, the manager of Johnson's group, for trademark infringement in 1996.[citation needed] Johnson reunited with Harp, Mundy and Knauss in 1999 for the PBS special Doo Wop 50.

The Marcels were inducted into the Vocal Group Hall of Fame in 2002.