Legendary glam pioneers the New York Dolls recorded five albums in 40 years. In 2009 Classic Rock talked to them about their work rate – and how to succeed against all odds

Picture this,” says David Johansen. “Here we are in this house on a lava flow, overlooking the whole ocean. There are palm trees everywhere, whales are frolicking and the frangipani is in bloom. So we just came in one morning and started playing it. They play a lot of music like that over there; it’s the prevalent beat.”

The New York Dolls singer is casting his mind back to Hawaii, where the band were shacked up in January this year, and their curious remake of an old classic.

Guitarist Sylvain Sylvain, the other surviving Doll from their scuzzed-up 70s springtime, remembers the moment too: “We were sitting on top of this hill, looking down, and I saw this cruise ship that looked like a hotel on water. All of a sudden it just came to me to do a calypso version of Trash. David came up and said: ‘Aw, that’s beautiful, man. Let’s try it.’ I felt like I was in one of those bands that gets a deal to play a cruise ship. It would be like one of those Teddy Pendergrass deals, y’know – women and children only. Can you imagine?”

Not really. Stranger things have happened, but the notion of the New York Dolls as inter-buffet ‘talent’ on a Saga liner is pretty much unthinkable. Yet, to the Dolls of 1973, the year of their eruptive debut album and the year they buckled the musical landscape of New York forever, so would the idea of recording in the Pacific idyll of Hawaii. Come to think of it, more than 35 years on, so might the idea of the Dolls being around at all. But here they are, Johansen and Sylvain, both pushing 60, both now elegantly weathered, still spading out some of the slammingest, dirtiest old rock music on the planet. 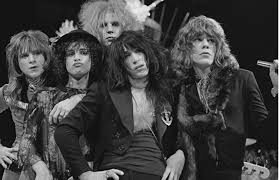